This time around we feature the collection of illustrator Stephen Wilson.

Talking just vinyl, believe it or not, it took me a while to get my own collection going. I grew up listening to a lot of my oldest sister’s cds, cassettes and LPs (Twisted Sister, Iron Maiden, Anthrax, Metallica, and so on). I never owned vinyl until my first year of college, whereupon I went to Generation Records in NYC and said “if they have Craft’s “Fuck the Universe”, I’m buying it”. I walked downstairs and there it was sitting right at the front. Scooped it up right then and there and have been collecting ever since. I’ve own a shitload of CDs over the years, but nothing really worth writing home about. I didn’t grow up with a lot of friends into different types of music, or record stores that were easily accessible. As a result, there was a lot of Korn and Slipknot floating around my room up until I ended up buying a copy of Pig Destroyer’s “Prowler in the Yard” back in 2002 or so. It was all pretty much downhill from there.

There’s been a lot, but I think the single most pivotal record for me was Boris’ “Smile”. I grew up “into music”, but it didn’t really start to integrate its way into my life until I started deciding what it was I wanted to do with my art, and where I wanted it to go. I initially wanted to do concept art for video games. After seeing Boris live and listening to that record, along with many of their earlier releases, it really dawned on me that music was something I wanted to have a deep involvement with, and upon reflection I changed course. I bought a drum set not long after, as well as my first guitar. I’ve yet to release anything outside of two things under the name Diviners (Ghosthymn and Sinking God), but when I feel a block coming on with my illustrative work, I start writing and playing music to work out the mental knots, all thanks to that album. Lately, the work of my friends and fellow artists has slowly been pushing me to make more of my own music. We’ll see how that ends up.

That’s a tough one to answer. But in recent memory, it’s mostly one people don’t expect: Beach House’s “Depression Cherry”. That record represents a lot of different things from the years 2015-2017, and has a lot of meaning for me. I found myself usually opting not to listen to most things and jumping right back into that album day after day, week after week, month after month. I’ll probably put it on after I finish typing up a lot of these answers too, now that I think about it, hah. But nevertheless, it’s an album of processing life’s many weird turns and twists for me. It helped me through some dark moments, the dreamlike lyrics allowed me put a face to a lot of feelings that were coming up during that weird and tumultuous time, and the mood of the album really suited where my mind was at the whole time. “The branches of the trees / They will hang lower now / You will grow too quick / Then you will get over it”. Something about these lines really strikes a raw nerve, even to this day. A heaviness I’m unable to fully quantify.

The record that always makes me feel good is…

Ha! This is a hard one for me to answer because I listen to a lot of bummer music, but I gotta say, Com Truise’s “Iteration” is an album that always puts me in an excellent mood. I bought that cassette about two years ago when I was living in Minneapolis from Electric Fetus on Franklin Ave. After the period I spent listening to that last album, I needed some “upper” material, and this totally suited that mindset. I spent some time delving into more dance-oriented, electronic stuff, and through Com Truise, I started to really unearth all sorts of great material, which branched out into a ton of new discoveries from Home’s “Odyssey” to Lorn’s “Maze to Nowhere I – III”. 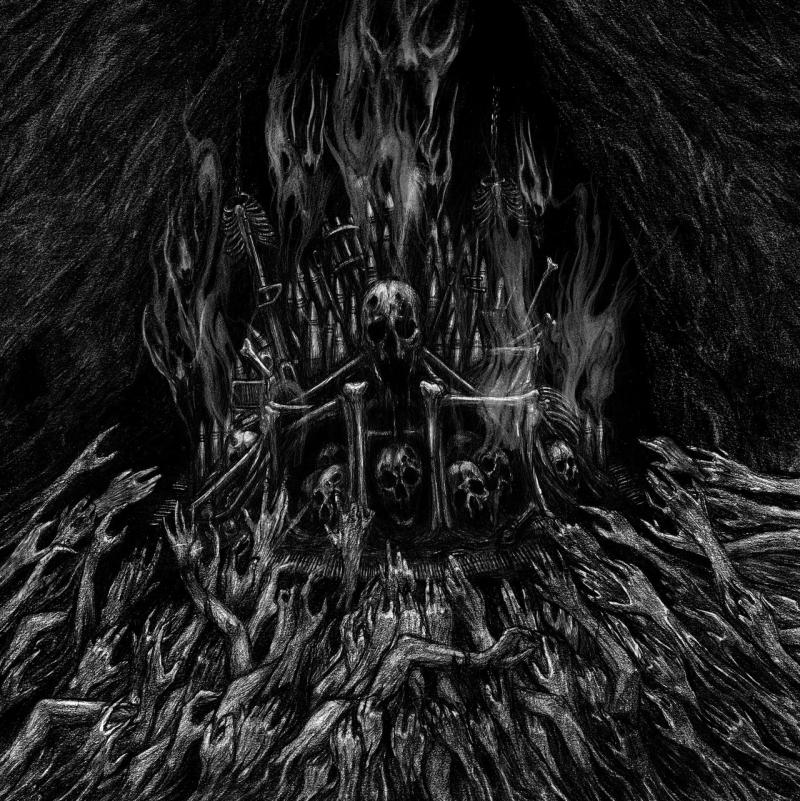 I have quite a lot of these kinds of albums, but Khanate’s “Clean Hands Go Foul” definitely wins and was the first album to come to mind. That’s a band that will forever have a place in my heart and I wish I had been able to see them live. While working on art, that’s an album that also tends to go on. When working with certain imagery, that’s an album that I turn to. It helps put me in a certain mindset I otherwise wouldn’t be in when tackling different projects.

As a visual person, it’s difficult to choose just one, so I’ll give you five. Planning for Burial’s “Below the House” is definitely one of them. It gives me anxiety. It taps into this weird, east coast suburban ennui I have lived with for nearly my entire life and just brings to mind the feeling of stagnancy, mundane routines and feeling trapped. “Pheromone” by Bloody Panda is another that sticks out in my mind, and in fact, the entire album’s packaging is one that totally mesmerizes me to this day designwise. Stephen Kasner’s artwork encapsulates the sound of that album through and through; haunted and uncomfortable. The third that comes to mind is the vinyl edition of “Moths Have Eaten the Core” by Canadian doom/drone/experimental band, Gates, featuring the work of A.E. Czaky and the design work of Gates mastermind, and wonderful friend, Bryan W. Bray. The combination of those two makes for a stunning package. Sutekh Hexen’s “Salem” totally blew me away music and artwise as well. Kevin Gan Yuen has always been one of my favorite artists and designers within underground music. Everything he touches is less of a design job and more of an art object. Then comes one of my favorites, which is The Body’s “I Shall Die Here”. The artwork on this album has always stuck with me. Bold letters, morbid album title, imagery that has always turned my head. Had this question been asked years ago, it would have been more black metal oriented, complete with grim artwork, I’m sure. But I’m older and definitely sad as heck now, and some of these releases definitely tap into that Big Depression Energy.

I don’t know that I have some truly weirdo ones (then again, I like a lot of weird things, so many I’m bluffing), but one of the ones that comes to mind is Servile Sect’s “TRVTH”. I think someone at some point somewhere on the internet described it as DJ Shadow meets Xasthur and that is probably the most up-my-alley kind of shit in existence. I also own, somewhere, a split between the Canadian band Ghäst and Yoga, whose side ended up becoming the stand alone release “Skinwalker”. They’re a band whose music exists within a similar realm for me. Nevertheless, they were a wonderfully strange band, and their weird influence on me cannot be understated. As I wrote this, I just looked them up and found out that member Eld Anka (RIP) had passed away recently. Their work was truly monumental and they’ll be missed.

That I’m not really sure of. I at one point played the game of trying to collect records based on rarity and spent stupid amounts of money for dumb things, but it didn’t last long. Lately it’s more or less just “this is pretty cool and I want it” and holding out until I can find it for a reasonable price if it happens to be out of print. But in the interest of answering anyway, it may be my sunn O))) Grimmrobe’s 3LP Picture Disc set. Or the test pressing of Scott Miller/Lee Camfield/Merzbow’s “No Closure” I did art for way back when.

I can’t quite remember so I’m going to mention the last two I bought. Midwife’s “Like Author, Like Daughter”. Back in March, my friend Sam (Aster Wreath) came to visit and we went to both nights fo the the Flenser Records Showcase. Midwife was part of the first evening and her music really stuck out to me. After saving up a little bit of money after the fact, I snagged one of the remaining copies from the Whited Sepulchre bandcamp. It’s a record that leaves a damn lump in my throat after listening to it without fail. The second is Elizabeth Colour Wheel’s “Queen Tired” cassette from Midnight Werewolf Records. ECW were also part of the Flenser Showcase and they blew me away, which caused me to purchase “Nocebo” the second night I had seen them (they played three sets and killed each and every one). I realized two of the songs they played weren’t featured on the record, and when I stumbled upon the cassette, I snatched it up quickly.

Stephen Wilson is an illustrator and designer focusing on unsettling and profound imagery, often touching upon themes of occultism and existentialism. He holds a BFA in Illustration from School of Visual Arts and currently resides in New York.

Be the first to comment on "Stephen Wilson (Illustrator)"