In this offering, we get up close and personal with Rodney Sheehan (vocals/bass) and Sean Sparbanie (guitar) from the Knoxville, Tennessee based rock band Mass Driver.

Rodney: I am pretty sure that one of my first records was one of those Star Wars (probably the Empire Strikes back) 45’s. While listening to it, you followed along in a story book. The record that I actually remember buying though was the Fat Boys, with the Beach Boys, 45 single of “Wipeout”. It was awful, but I loved it.

Sean: The first record I ever bought with my own money was… Metallica- Kill ’em all. I can vividly remember holding this in my hand at the store, wondering if I’d really love it. I didn’t. It wasn’t until later in life that I truly appreciated this record. I think it’s amazing now.

Rodney: It’s kind of a toss up. I loved Metallica and would listen to “Justice” over and over again. But trying to learn that stuff (on guitar before switching to bass) seemed like an impossible task. And would often end in things being thrown against the wall in frustration. However when Nevermind blew up it made the idea of making music feasible.

Sean: Van Halen – 1984. I got this record for Christmas when I was 6 or 7 years old. I was blown away by Eddie Van Halen in ‘Hot for Teacher’, which I originally saw on Friday Night Videos. My mom said she wouldn’t have bought it if she had noticed the cigarettes on the cover art. I still have this original LP. 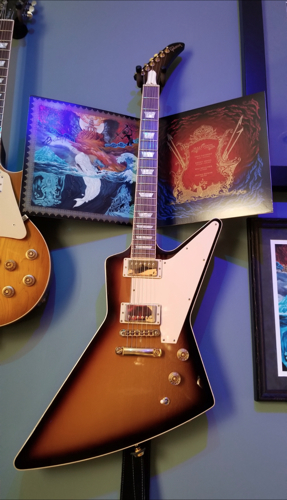 Rodney: Well when I was a kid the answer would probably be something like “Ghost Busters” by Ray Parker jr. The thing that I remember the most about that was that B side was just an instrumental track of the song. Come to think of it, the Fat Boys record did the same thing…. how dumb.

From a teenager till now I’d say that it’s probably the CCR album “Cosmo’s Factory”. Most people think of “Fortunate Son” or “Proud Mary” when it comes to that band. But when you listen to their albums you’ll find that they were heavy and weren’t afraid to put out long somewhat trippy songs. Hell, “Cosmo’s Factory” opens with the song “Ramble Tamble” which is over seven minutes.

Sean: I have no goddamned idea. Maybe Led Zeppelin III?

Rodney: Probably The Ramones album “It’s Alive”. Their foot is on the gas for that entire album. It’s so awesome and comically over the top how hard they’re going that you can’t help but smile.

Sean: Shadowy Men on a Shadowy Planet – Sport Fishin’. I saw a comment about Brian Connelly (guitar) that simply stated “He knows his way around that thing”. I couldn’t agree more. Simple but excellent songwriting.

Rodney: When I was a moody art school kid the answer would’ve been the album “Yes” by “Morphine”. You have a drummer, baritone sax player and a beatnik singer with a voice that makes you want to slit your wrists. Plus he plays a two string slide bass tuned waaaay down. If you ever want to wallow in your misery I can’t recommend that band enough!

Sean: I think Dr. John – In The Right Place is a solid choice for this. Sometimes it’s better to embrace poor choices and bad luck.

Rodney: That’s easy, Nazareth “Hair of the Dog”. As a kid, when I saw my moms 8 track of that album it scared the hell out of me….and made me want to listen to it. I now own two vinyl versions and the CD of that album. The record itself (besides the title track) is pretty meh. But that artwork is epic!

Sean: Mastodon – Leviathan. A bleeding sky over the White Whale, beautifully rendered with the Pequod getting thrashed in a boiling sea. Metal. 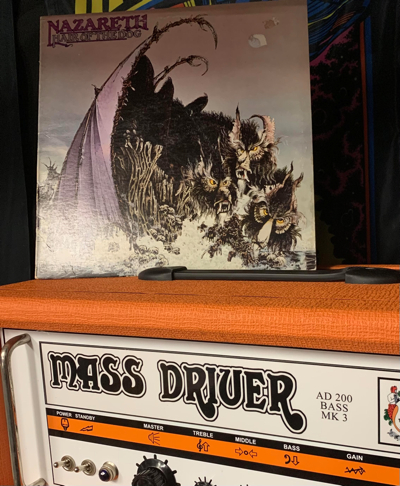 Rodney: That’s a toss up. I own an original Pac Man Fever album that I got as a kid. And an original Transformers the movie soundtrack (animated 1986 version) album that I bought brand new. I listened to the Transformers album non stop while playing with the toys. And I mostly listened to the song for the game “Defender” from the Pac Man fever record. I can still remember the chorus….”I’ll defend this space till the end…..I’m the captain of a ship and it’s meeeeeeeeenn!” Now that’s song writing!

Sean: Mr. Bungle – Disco Volante. I hated it the first time I heard it. Then, something clicked and it’s a favorite both for songwriting and brazen production.

Rodney: Flipping through my collection here I’d say it’s either “Monsters of the Midwest volume 2” or the California Raisins album “Sweet Delicious and Marvelous.”

The Monsters of the Midwest album is a collection of local garage rock bands from the late 60’s and early 70’s. Lots of good fuzz tones on that record. The California Raisins record I got as a kid. It was the “Raisins” covering a bunch of hits from the 60’s. Which in hindsight helped to introduce me to a lot of 60’s soul, which I still love. So thank you California Raisins!

Sean: The Kenny Burrell Quintet with John Coltrane. I don’t think it’s especially rare, but not exactly everywhere. Sometimes I’ll listen to a great guitarist and think; If I worked hard enough, I could play this song. When I listen to Kenny Burrell, I think; There’s no fucking way I could ever play this song.

Rodney: I believe it was the reissue of the Atomic Bitchwax’s first album. I was so pumped that they decided to reissue it because their first and second album are damn near impossible to find.

Sean: Erroll Garner – The Elf. A 2 LP set from the most entertaining pianist I’ve ever heard.