Share This Article
SPOILER ALERT!  This article is filled with them.

My wife and I had nosebleed seats in Chicago. GAL-R, row H on the 6th floor. You couldn’t be any farther away from the stage. This was our third time seeing Porcupine Tree, and we were just happy to be there.

As we were waiting to get on the elevator to the 6th floor with another random couple we had struck up a conversation with, we started talking to a woman who was standing nearby. Turns out she was the theatre manager.

She asked us where we were sitting, and we told her the 6th floor, last row in the theatre. She then proceeded to tell us that our seats were being upgraded. She walked away, and came back after a couple minutes and handed me two printed tickets. 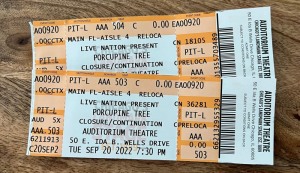 PIT-L row AAA, seats 503 and 504. I have never been to the Auditorium Theatre before, so I didn’t know where the seats were. We found an usher, and she told us to walk towards the front of the stage. We were at row Z/AA, and I stopped and told my wife that we went to far down. I assumed it went A-Z, AA-ZZ, AAA-ZZZ, so our seats must be back in the first row of the last section on the first floor. We walked back there, and the usher told us to go all the way up to the stage, you are sitting in the front row.

What, what, what?!?! I couldn’t compute the words I had just heard. Two and a half weeks later and I still can’t believe that I saw Porcupine Tree from the front row, on what could possibly have been their last Chicago show, ever.

Porcupine Tree has a strict no photo/video policy in place, which I completely understand. Security let me take the photo at the top of this post, the only one I got inside the theatre, before the show started. 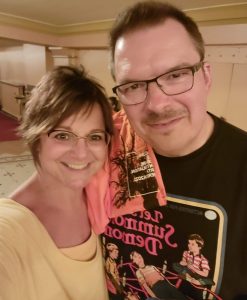 They opened with “Blackest Eyes,” and then proceeded to play for three hours, with a 20 minute break about half way through. Steven Wilson was a bit under the weather, which he joked about a couple times. He sounded fantastic none-the-less. In addition to playing their latest release, CLOSURE/CONTINUATION in its entirety, the set list was packed full of fan favorites.

“Sound of Muzak,” “Collapse the Light Into Earth,” “Even Less,” “Last Chance to Evacuate Planet Earth Before It Is Recycled,” “Trains,” “Shallow” and “Sleep Together” just to name a few.

The musical highlight of the show for me was their performance of the epic 17 minute track “Anesthesize.” It’s one of my favorite Porcupine Tree songs. Gavin Harrison’s drum work on this song never ceases to amaze me. The amount of fills he incorporates is simply astonishing.

This was my third time seeing Porcupine Tree in Chicago, and hands down my favorite performance by a long shot. Don’t get me wrong. The other two shows were outstanding as well, but it really felt like they were giving it their absolute all.

My fingers are crossed that we don’t have to wait another 13 years for a new album and tour.

Pink Frost Share Video for “Until The Summer Comes”

Collab The Light Into Earth: The World’s Most Ill-Advised Cover Project

Be the first to comment on "Porcupine Tree @ Auditorium Theatre, Chicago, 9/20/22"