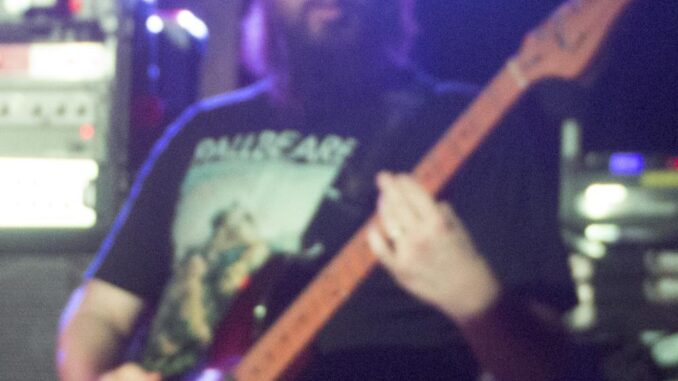 This time around we feature the collection of Redbait guitarist Will Jameson, who some of you may know on Twitter as @burgleyourturts.

The first album I remember picking for myself was Guns n’ Roses Appetite for Destruction. An unsavory choice for a 7-year-old, maybe, but after I heard Paradise City and Sweet Child O’ Mine on the radio, I had to have it. There was always music in the house but that was the watershed where it was like, “this is different from what happens when my parents put on a record and I need it.” I still have the tape, I guess my parents never looked at the artwork inside.

The record that made me actually pick up a guitar was Pearl Jam’s Vs. Heard it at a friend’s house and I was mesmerized by what seemed like the most menacing and cathartic thing I’d ever heard up to that point. Mike McCready’s SRV worship filtered through the Gossard-Ament riff machine on those first two records is the biggest influence on my playing by a huge margin.

Over a lifetime, it’s certainly the ones I already mentioned, but those don’t get much play anymore. In recent years, I’ve probably listened to Panopticon’s Kentucky more than anything else. Underneath an incredible set of songs, there’s a mixture of political awareness and sense of place in that album that felt like finding a new musical home when I found it.

Funkadelic’s One Nation Under a Groove. This was their first record with Junie Morrison and his synth playing and songwriting takes them to another world. The title track is an instant good mood, and if you need something really uplifting, the bonus EP has a live version of Maggot Brain with Michael Hampton on guitar that’s soul-cleansing.

Too many to ever list, but but for a specific winter kind of sad, Joni Mitchell’s Blue is the only thing that fits. A friend gave it to me for Christmas one year during a bummer of a season and it’s always stayed in that place in my head. If it’s cold and close to Christmas and you don’t want any part of it sometimes you just have to queue up “River” and wallow in it for four minutes and five seconds.

For sheer amount of time spent staring at them, it’s probably Michael Whelan’s run with Sepultura, Beneath the Remains, Alive, and Chaos AD. I’d loved his work on sci-fi book covers for years so it was awesome to find the overlap as I started getting into heavier music, and the creepy detail in those paintings is incredible.

I’m not much of a crate digger, most of my vinyl-buying dollar these days goes to supporting friends’ records, so there’s not much hard to find stuff on my shelf. Probably the only rare item is a test press of Momentum’s Herbivore that I got when Cory from Halo of Flies Records was cleaning out his shelves after the label shut down (rip). I’m a huge fan of Fall of Efrafa and the family of bands that sprung from their ashes, so owning a little piece of that history is cool. Other than that, I don’t know that it’s particularly rare, but my favorite treasure I found in the wild is a copy of the Mineral/Jimmy Eat World/Sense Field split 7″.

There are a few in the mail now, but I think the last things I got were Ithaca’s Languange of Injury and the Twilight Fauna/Horse Cult split 7″. Last one I ordered was Body Void’s You Will Know the Fear You Forced Upon Us, really looking forward to that.

Redbait’s latest EP, Red Tape, was released on April 19, 2018. First pressing cassette is sold out, but you can still pick up a copy of the second pressing right here. It is also available as a “name your price” download.

Be the first to comment on "Will Jameson (Redbait)"