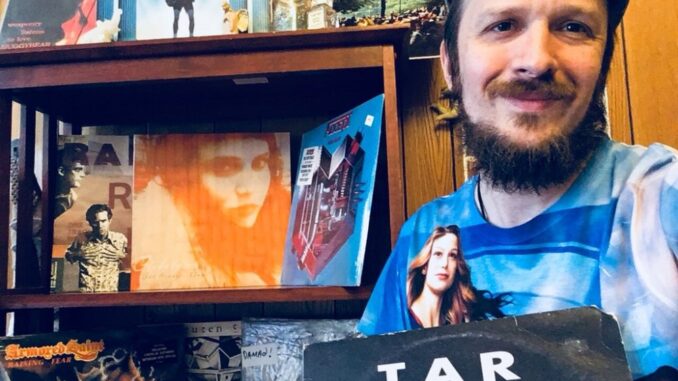 This time around we feature the collection of Walking Bombs vocalist/multi-instrumentalist and creator of Metalriot.com, Morgan Y. Evans.

I didn’t buy a lot of vinyl until I was in college, as when I was a kid the cool thing became cds pretty fast. But by the time I was in college I remember combing Last Vestige in Albany and finding rad stuff. Honestly, the first vinyl record I really remember buying vividly is Songs About Fucking by Big Black. I am sure there was some dorkier shit before that though. Like, no one starts out that cool.

My dad always played jazz records in the house which was super cool because it really informed my musical vocabulary at first and later on I realized I knew a lot more about some jazz artists than your average rock person. I love all kinds of music. My first instrument was trombone which at my dad’s funeral Dr. Know of Bad Brains was there and he encouraged me to start playing it more again. He was really correct because I used to be first chair and then I had a bad heroin problem from 15-20, like an adult’s level of addiction as basically a kid. And I quit trombone and joined punky grunge bands. So there was some innocence lost there and I was flat scared to play trombone again cuz of what buried stuff it might stir up but instead it helped me reclaim a lost part of me and I have a lot of fun playing it on my Walking Bombs albums or live sometimes I accompany my girlfriend, psych folk singer Globelamp, on her song “Lookout Mountain” about how racism made a lot of great art become lost in history. But I can’t say what the first record was around the house. I do know my sister Cambria had a Karen Carpenter 7″ of one of their hits that she swiped from my older sister Stephanie’s room that I remember vividly having this bright sky blue label, and it is probably my earliest memory of thinking a record looked cool.

As for singing rock though it is funny because the first time I knew I wanted to be a rock singer, which I have done since 1993 in many bands…I was in Sears in Kingston with my mom and dad and maybe Cambria and I remember wandering off to the electronics section. Two life changing things happened. They had one of those weird fuckin’ electricity globes that pulse to noise and the fake purple lightning moves to your finger where you touch the globe. It was pulsing to the “Hunghhh!” sounds from George Michael’s “I Want Your Sex”, which was blasting in the aisle. It blew my mind that a song so scandalous could be played in a department store. I was a kid. I thought it was awesome.

Then I went around the corner and swear to god on one of the giant boxy tvs they had back then I saw the video for the first time in my life of “Sweet Child…” by G n R. I was hypnotized. I thought Axl was the coolest fuckin’ alien and the song was so good. I liked how he danced and the band seemed like a gang. I knew I wanted to be a frontperson after that but didn’t get into a band until Nirvana came around and everyone started bands my age wanting to be them or Pearl Jam. So I was always kind of between wanting to be flamboyant or decadent or like mopy grunge, but I think the first two win out more often when I front bands by far. Haha. And I should have known then that I was bi from loving George so much which got me teased cuz this kid in a Slaughter shirt I remember on playground said it was for girls. But I also loved the like thrusting rooster Axl L.A. stuff. So I was all over the place. Appetite was the big rock introduction though. I only had it on tape first but then I finally got it on vinyl years later when of all people my mom came back from a yard sale one day when I was visiting my parents house and had a pristine vinyl copy of Appetite and was like ,”you don’t want this, right? I just grabbed it in case.” And I was like ,”sweeet!”

Weaponry Listens To Love by Huggy Bear. Out of all the Kill Rock Stars kind of classic bands I think they were so cutting edge and slept on now a bit. They were so feminist and queer friendly. They had crazy jazz punk influences and better kind of diatribes and manifestos than Refused and Nation Of Ulysses, no shade to those bands just my opinion. It’s a masterpiece of jagged, post-modernist crash. I loved them so much I had Cambria do a stick n poke tat on my wrist of a heart and x from one of their seven inches years later. I used to smoke a lot of cigs out the window of my room listening to “Why I’m A Lawbreaker” and “For Insecure Offenders”.

Van Halen 5150. Anyone who doesn’t think that album kicks ass is a total wimp. The cover art is the most homoerotic thing I have ever seen, haha. Little known fact about me is I am semi-obsessed with the Van Halen song “Dreams”. It is Sammy’s finest VH hour. A masterpiece. You’ve also got “Why Can’t This Be Love” which I know it isn’t all cocky and “Aint Talkin’ Bout Love”, more sensitive. Some people hate that. But you can’t deny that mid tempo groove when the chorus kicks in. And “Summer Nights” is one of the greatest Summer rock anthems ever.

It depends if I want to feel better or worse, haha. Worse probably The Head On The Door by The Cure or something else mopey, though that can also feel comforting. Usually if I want to feel a lift though I will gravitate to like Boston or Foreigner and stuff with big, unabashed hoohy choruses I remember on the radio as a kid. Or if you want to turn the downer to rage catharsis you just put on a good hardcore record like Converge or something.

Hard not to pick Raising Fear by Armored Saint, out of the records I own. The image of the saint just like bursting up and destroying society is so bad ass. You would see that and think he could definitely beat, like, Murray from Dio’s art. It is also a way more metal looking cover than Symbol Of Salvation. Other than that I would pick The Orange Glow by Globelamp. There are a lot of copies around my apartment because she lives with me and the album has a photo of her beautiful, whimsical but kinda sad face on it.

Cambria and I grew up obsessed with this educational album featuring Muhammad Ali. My dad used to years earlier be an art director at Sports Illustrated and met Ali and always said he was super cool in real life like you would expect. Maybe that’s why we had the album? But it is this crazy kids record. It was Ali and His Gang vs. Mr. Tooth Decay. It is fucking amazing and has Ali on the front with like rainbows and battling cavities. It claims Ali cracked the Liberty Bell with a punch, I believe. And I recall it had him teach kids at the end how to make like natural vegan ice cream with fruit that wouldn’t rot your teeth or something. Mind blowingly cool. My older sister Stephanie hated it cuz we played it constantly as kids so she straight up hid it under the floorboards in the attic but we found it one day again when we were playing He-Man vs. My Little Pony in the attic, lmao. It is still around somewhere. I have a lot of stuff.

I honestly do not know because when my father died I got a lot of his albums including many very weird foreign student drinking songs albums and Estonian records or classical music. I have a promotional copy of Sunn O)))’s Monoliths & Dimensions that is not the like commercial release packaging. It has the inserts and stuff but is more spare and I think I got it from Dave from Earsplit/Gridfailure around the time I went to the listening party for that record. That record blew my mind and influenced some of my stuff now, because it was like Sunn O))) embracing jazz and Jim Jarmusch was there that day. Super cool memory.

I am not sure if the band gave it to me or I purchased it but I saw this awesome punk band Earworms and got their self-titled Dead Broke Rekerds release. Oh wait, I think they did gift me that. The last one I actually bought myself was Stake My Claim by this band Big Eyes. It’s on Don Giovanni and I was blown away when I saw them play BSP Kingston. Kait is a really great songwriter and I think the band have a new record out soon so I will need to buy that as well.

Walking Bombs is releasing a collaborative political album with noise architects Gridfailure called Suicide By Citizenship on 4/16 via Nefarious Industries, featuring cameos by Tad Doyle, Laura Pleasants (Kylesa, the Discussion), Megalophobe, Mike Score (All Out War) and more. Check out a teaser here.

Be the first to comment on "Morgan Y. Evans (Walking Bombs)"