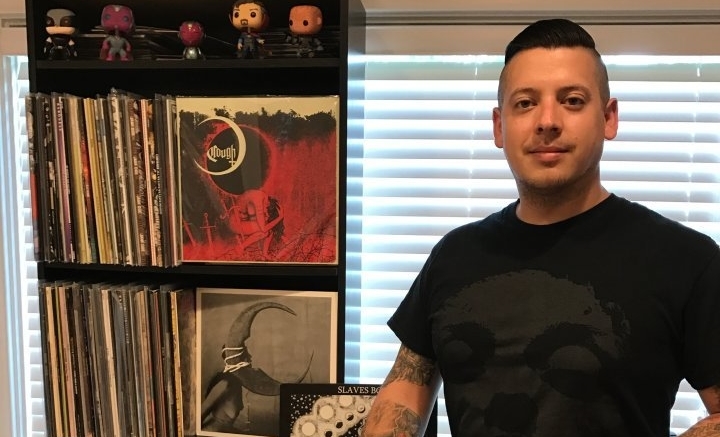 In this offering, we are very pleased to get up close and personal with musician and PR/Label Owner Josh Thieler..

The first record I ever bought with my own money was…
“Converge – No Heroes. I can credit Converge with a lot of things. One of those things is that they inspired my initial interest in vinyl records, and they helped me build it into a full on addiction. Some day, I’m going to be on that Hoarders show and I will have an entire room that is just thousands of different colors from the 459th pressing of Jane Doe.”

The record that made me want to make music was…
“There are a lot of records that make me want to make music. That is a recurring thing over the years where I hear some record for the first time and I’m just like ‘yeah, I gotta go write some stuff now’. Its happened for me with The Chariot, Oranssi Pazuzu, Fight Amp, Electric Wizard, Primitive Man, Zao, Windhand, Lord Mantis, Coffinworm, Iron & Wine and sooooo many others.

The first record that did that for me was Tourniquet’s Stop the Bleeding. However, that was before I got into vinyl, and it was a cassette tape. That was before we even had a cd player so yeah. But it was also the first CD I bought with my own money, and when they finally decided to press it on vinyl decades later, I scooped it right up.”

The record I’ve played more than any other is…
“The vinyl record that I’ve played the most is definitely Mgla’s Exercises in Futility. It stayed in my record player for months. I’ll take it out when I get a new record for like a week, but then I put that Mgla record right back in.”

The record that always make me feel good is…
“Pretty much all of them do but I would have to say Skáphe Skáphe². I love that record so much. It’s so nasty, nightmarish, and depraved that I can’t help but smile.”

The record I turn to when I’m feeling down is…
“Again, this is basically all of my metal records. I can’t listen to non-metal music if I’m feeling down. Recently, I’ve been down a lot. And the record that I have been spinning the most in those times has been Succumb Succumb.”

The record with my favorite cover art is…
“Wow. Just wow. How am I even supposed to answer that? How does anyone answer that?

Stephen Wilson (Unknown Relic) has done amazing album artwork for bands like Atrament, False, and Aevangelist. I love his style so much.

I have been obsessed with the artwork for Deathspell Omega’s Drought by Manuel Tinnemans. Absolutely fantastic artwork.

I also really dig Justin Bartlett’s work with Dragged Into Sunlight, Lord Mantis, and Trap Them.

I love the artwork for both albums I referenced above by Skáphe and Mgla.

I also especially enjoy John Baizley’s (Baroness) album artwork. So I have all the Baroness albums and the Black Tusk, Kylesa, Pig Destroyer and others.

I would be lying if I didn’t tell you that I stylistically love and also appreciate how uncomfortable the artwork is for Couch Slut’s My Life As a Woman. It came as close to representing the music on that record as you could with visual media.

I’m also very fond of the album artwork I have done for my own band, because I put countless hours in a labor of love for each one.”

The strangest LP I own is…
“At the time I bought it, it wasn’t that strange but now I would say Bill Cosby Himself. Other people would probably point out my Taylor Swift 1989 record, my Abba records, or the Metallica record I bought for a dollar (I don’t like Metallica. Still sorry.)”

The rarest LP I own is…
“I have no idea. I’m a bad collector. I like having them. I like looking at them and listening to them, but I never keep track of their rarity or worth because I’m keeping them forever. I don’t want to ever sell them or anything.”

The last LP I bought was…
“I don’t know what the last one I ordered was, but I just got Triumvir Foul’s Spiritual Bloodshed in the mail this week. Such an incredible record.”

Josh and his band Slaves BC are planning a new release for late October, early November, and are also working on an EP that they hope to release soon after that. Be sure to check out Josh’s pr/label Cvrsed Breath.