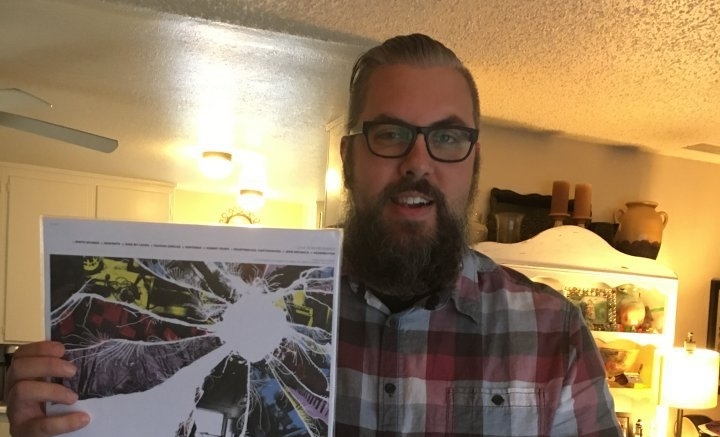 This time around we feature the collection of writer/musician/faux theologian and friend, Jeremy Hunt.

The first record I ever bought with my own money was…
“Before I answer this, I should probably give a quick rundown of how I interacted with physical music during my childhood. I was born in 1979, which means that I have some pretty distinct memories of our family’s first few CDs and the CD disc changer we got for our home stereo (probably in 1985/86). Up until then, my two main mediums for music were records and cassettes. But since I was still a kid at this point, a lot of these memories tend to blend together in the ether of my brain.

All that to say, I distinctly remember my first cassette purchase: Go West Young Man by Michael W. Smith. Ironically, my first vinyl purchase came much later, after I had left home and got my own record player. Again, this is where things get a bit fuzzy, but I’m pretty sure it was a collection of Henry Mancini themes, featuring the Peter Gunn theme. I picked it up at a consignment shop (or maybe an antique store) and got it mostly because I love The Blues Brothers and that movie makes great use of the Peter Gunn theme as the theme for Jake and Elwood.”

The record that made me want to make music was…
“Star Wars soundtrack on double vinyl. This is one of the first records I ever remember listening to on my folks’ record player. I had the music memorized years before I saw the film. I’d put it on the stereo, lay down on the floor and just stare at the pictures and devour the liner notes. Film scores played a huge role in my musical education and composers like John Williams, James Horner, and James Newton Howard were some of my first touchstones of inspiration.”

The record I’ve played more than any other is…
“Cave In – White Silence. Honestly, the albums I chose for this question and the next two could probably switch in and out here on any given day. All three are high on my replay list. But I decided to go with Cave In because this record is utterly fantastic. As of now, it’s their final album and if they never make another one, it’s a killer way to go out. It represents the culmination of all the facets of their sound over the years. And because of the variety on display, it’s an album that pops up a lot in my listening rotation.”

The record that always make me feel good is…
“Thrice – The Alchemy Index. In a similar manner, this EP collection represents Thrice at their most diverse. If you’re not familiar with their approach here, they composed four EPs of six songs each, with each one focusing specifically on the four natural elements: fire, water, air, and earth. It was an incredibly ambitious effort and, nearly ten years later, still holds up. Fire is Thrice at their brutal heaviest, Water is murky and electronic, Air is aspirational and driven, and Earth is almost folky and Americana-esque. Taken all together, it shouldn’t work, but it does and I absolutely love it.”

The record I turn to when I’m feeling down is…
“Underoath – Lost in the Sound of Separation. I actually just listened through this one the other day when I needed a musical pick-me up. If Define The Great Line was a revelation, this one showed that Underoath wouldn’t be resting on their laurels. They continued to experiment with their sound, pushing the edges of what they wanted to be.”

The record with my favorite cover art is…
“Zozobra – Bird of Prey (tour press). In case my love of Cave In wasn’t already clear, this should help solidify it. I tend to be rather OCD with the bands I follow/support and if you’re in a band that I like and I find out that you have a side project, I will likely support that band as well. Case in point, Zozobra. This is Caleb Scofield’s musical offspring and I picked up this pressing of their second album when I saw them on tour for the third Zozobra record. I’m pretty sure Aaron Turner (ISIS, Sumac, Old Man Gloom, etc.) did the cover art (he did the version that was used on the CDs and regular record pressing). I just love how garish and cool it is, with the purple, green, and yellow all coming together here.”

The strangest LP I own is…
“Raymond Lefevre & His Orchestra – Merry Christmas. Honestly, I have no idea how I ended up with this in my collection. It was probably given to me by a family member at some point…or maybe I picked it up in a box from a thrift store? No clue.”

The rarest LP I own is…
“Tilts – Cuatro Hombres (test press). Tilts were a band from the St. Louis area and I found out about them when their lead singer/guitarist, Andrew Elstner joined Torche. That thing about exploring bands’ side projects? Yep, it led me to Tilts and I’m so glad it did. For all the niche/weird genres out there these days, sometimes you just need some good old-fashioned rock and roll. That’s what Tilts delivers and they did it in spades. I got this test press as part of a Kickstarter package the band offered to help fund the making of this album. My copy is 105 of 130…and on top of that, I asked for custom Rick & Morty artwork on the sleeve. I don’t know why combining Rick & Morty and Tilts felt like a match made in heaven, but it made sense at the time and now I just laugh whenever I look at the record sleeve.”

The last LP I bought was…
“Grids – Kansas. My buddy Gus Engstrom is the front man/bassist for a ridiculously heavy noise rock band from NC, powertakeOff. Before creating ptO, he was a member of another noise rock NC band, Grids. Kansas was their first full length and I realized the other day that I didn’t own a copy of it. So I hit him up to see if he had any extras laying around. Thankfully he did, so I sent him some hard-earned cash and he mailed me the record. Gotta love being able to buy music directly from your friends!”

Jeremy recently released the debut album God Is The Warmest Place To Hide with his band Qoheleth. You can purchase the album here as a digital download or CD.

Be the first to comment on "Jeremy Hunt (Writer/Musician)"