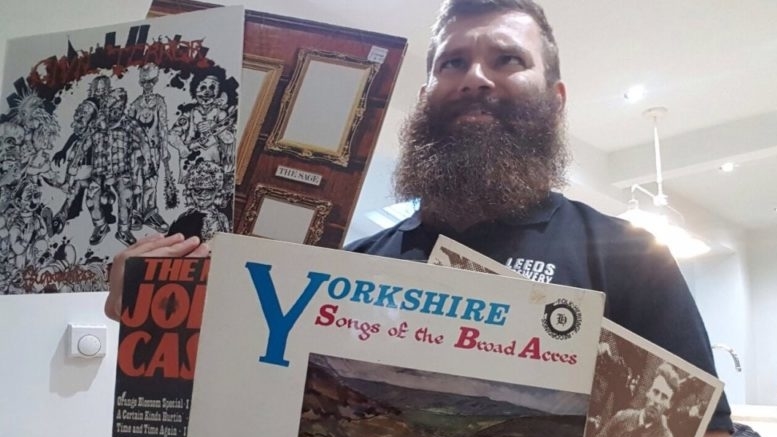 In this offering we feature the collection of Corky, bass player and vocalist from the Leeds based doom band BongCauldron.

I’m pretty sure it was a CD single of Eminem’s “Guilty Conscience.” The first album I ever bought was Battle of Los Angeles by Rage Against the Machine. The first album I received as a gift was Lightning Seeds Dizzy Heights on cassette.

Be Here Now by Oasis. My older sister had it on cassette; I was eight or nine at the time and didn’t play any instruments, so I used to make up and arrange my own songs in my head, which funnily enough sounded a lot like Oasis.

Very hard to say. I go through phases of playing a certain album on repeat for about a month, then moving on to something else, so there are probably dozens of albums that I’ve listened to hundreds of times each. I’d guess at something by Metallica or Bathory.

Again, hard to say. Different albums affect you in different ways at different times, but one that always gets me going is Minor Threat’s complete discography CD. I’m not a massive hardcore fan but they’re one of my favourite bands and all their songs somehow give me energy from nowhere.

There’s no one album I’d turn to – and fortunately I don’t get down very often at all – but if you really want to feel some agony while you’re already low, you can bang on tracks like “I Know It’s Over,” “That Joke Isn’t Funny Anymore” or “Never Had No One Ever” by The Smiths. All the sludge in the world couldn’t crush you like “Last Night I Dreamt…” does when you’re moping over some bullshit.

Pink Floyd’s Dark Side of the Moon. My mum had it on vinyl and CD and the artwork always intrigued me, but for some reason (regrettably now) I didn’t listen to it for years until I was mid-teens. Now it’s one of my favorite all-time records. I love how the artwork gives nothing away about the band or the music.

Songs from a Colonial Tavern by Tayler Vrooman 1968. I love traditional folk music and spotted this in a charity shop thinking it’d be right up my street. Not only is it not very good, but the guy’s voice is really weird and annoying as hell. Bad purchase.

I’ve no idea. I don’t have any collectibles I guess, but Starve gave me a copy of their Wasteland LP that was limited to 500, so maybe that.

I can’t remember. My player has been out of action for at least a year so I’ve not bought anything for a while. It may have been either been Bosh! by Cleft or Folk Songs of Olde England Vol. 1 by Tim Hart and Maddy Prior.

BongCauldron will release their new album Binge on December 1, 2017. A pre-order is live now, and it is available as a digital download, compact disc or on two different variants of vinyl (green/black) here.

Collab The Light Into Earth: The World’s Most Ill-Advised Cover Project