This time around we get up close and personal with Matteo Ravelli, drummer in the Milano, Italy based multi-genre instrumental band King Bong.

It was “Emancipation” by Prince (well, not actually “Prince” at the time), I used Christmas money from my grandparents to buy the triple cd. Yeah, I could have bought something better but I went crazy over it, I loved the fact that it was 3 cds and I was just 11 so many of those sounds were new to me. Today I’m still a Prince fanatic but I think that record is among his worst ever.

Again, I’d have to go with Prince, “The Gold Experience”, given to me by my uncle for Christmas. There are a lot of records though that made me feel that way again but in different ways, any record that gives me something new makes me want to make music. It doesn’t happen everyday obviously but it’s not rare at all for me to stop in the middle of a record because it just makes me want to play or compose or record or whatever. For example, the main theme for “Marathon Des Sables” from “Sand≈Return” was written while listening to an album by Daniel Zamir, an Israeli saxphone player.

That’s a hard one. It’s probably “Exit: Stage Left” by Rush but it also could be “Purple Rain” by Prince or “Operation: Mindcrime” by Queensryche, one of those.

When I find a new album I really like I just can’t keep myself, I listen to it everyday for weeks; you know you found a great album when after those weeks you still want to play it everyday.

When I was a kid it happened all the time, with those I named, “Foxtrot” by Genesis, “Master Of Puppets”, “Nightfall In Middle-Earth”, “Scum”, it was all magical and new and fun.

Recently it happened to me with “Schlagenheim” by black midi but in the last year I’ve no doubt that the first Fever Ray album is the record I’ve listened to the most.

“The Colour of Spring” by Talk Talk. I know it’s not the most happy record on Earth but I find it infectiously lively and uplifting, to lose yourself in that sea of sounds it’s just heavenly. It’s got a magic of its own I’ve never found in any other record.

It also depends on the day, if I wake up with the lust for death metal then “Covenant” by Morbid Angel might be the feelgood album of the day and it wouldn’t be the first time it happens. Or maybe “Moanin” by The Jazz Messengers, who knows. 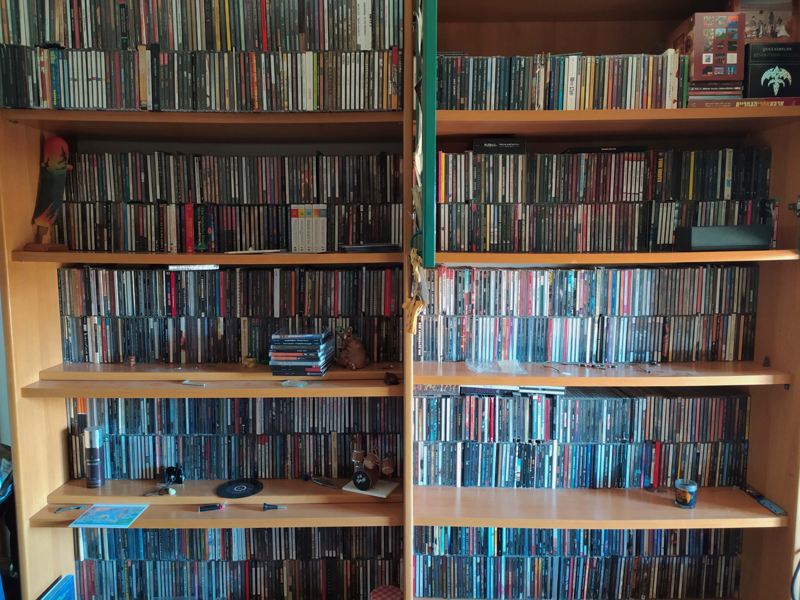 Well, seeing the prevous answer I’d have to be coherent… but come on, that’s boring. So I’ll go wth “The Real Thing” by Faith No More, one of the best rock albums ever. Beside the obvious funny side of Patton’s vocal shenanigans, the whole album is so playful and funny and contagious, you’d have to have no heart not to feel that.

That’s if I actually want to feel better, if not I will just put on “Willpower” by Today Is The Day on repeat.

I’ll be boring and not surprising at all but I can’t answer anything but “In The Court Of The Crimson King”. It’s just magic, it stuck with me since I was a child and I bought the album.

Apart from that, I love all those covers that really reflect what’s inside the album, I could name “Blackwater Park” by Opeth, “Sadness Will Prevail” by Today Is The Day, “First Utterance” by Comus, “Reign In Blood”, there’s just so many and all of them are perfect.

I’ve got a weird boxset of 4 LPs with a lot of ’20s and ’30s jazz, I never found out where it comes from, I bought it in a dusty store in Trieste for 10 euros. But I’m not really one to go too much for random stuff, money is pretty tight and the good records to buy are too many.

I guess it would be a double orange vinyl edition of “The Downward Spiral”, not a rare record but a pretty rare edition, I bought it in Paris ten years ago. Then again, sadly I’m not stinkin rich and I don’t buy records to collect them, I do it to listen to them, so if I was to choose between a rare orginal edition of a record and its reissue on 180 grams, I’d probably go for the reissue (after checking who remastered the album, when and how).

“WASTELAND: What Ails Our People Is Clear” by Lice, an English band playing some weird proggy industrial post-punk with an intonarumori, one of the first sampler instruments from the early ‘900. That’s the last one that arrived but I’m waiting for another one so that may be the actual last, a reissue of “Socalismo Tascabile” on double red vinyl, a gorgeous record from an Italian band called Offlaga Disco Pax.

King Bong’s latest album, Beekse Bergen, vol. 6 – OGOPOGO, was released on March 5, 2021. Available from King Bong’s Bandcamp as a handcrafted 4-CD box set with individual sleeves, a postcard with map and an outside cover to house everything. Digital download also available.