This time around we feature the cassette collection of Gleb Kanasevich.

The first cassette I ever bought with my own money was…

Marilyn Manson – Antichrist Superstar (I just bought my first record with my own money mere two years ago, haha, and it was Wilted Woman – “Diary of a Woman”)

Ooooff… This is so hard to pin down, simply because I’ve been so many different forms of “musician”, but here are the one ones that really changed the course of my life:

-Uriah Heep – Look at Yourself. Dad got me this tape for my 4th birthday. Their sound made me just simply want to do music… Totally transformed me and honestly probably paved way for my being into heavier music. I recently saw a little clip on youtube where Fenriz from Darkthrone talks about growing up on Uriah Heep. Later in my teens Darkthrone was also a huge influence, and I really think that’s not an accident. It definitely has something to do with the way we conceive of music and what we look for in sound.

-Jean-Michel Jarre – Oxygene (I was around 7 or 8). Dad got this cassette for me when we were just having a day out at the bazaar outside Minsk. That was the place where we got most of our cassettes, just because they a lot cheaper (most likely illegally reproduced, haha). This tape definitely made me want to compose my own music in this more “solo” ownership type of way. The beginnings of the one-man band, haha.

-Depeche Mode – Songs of Faith and Devotion (a little later, I was 10 or 11) dad got this for me under similar circumstances, except he made an interesting and, I think, more “hip” choice by early 90s standards. After hearing this tape, I basically became a goth kid until we moved to the US and I heard black metal. I think that Dave Gahan in general was just always a model performer figure for me after seeing a few clips on TV (he was in and out of rehab at that point and in Europe the news kind of always kept an eye on him and what was going on with his heroin recovery).

-Lingua Ignota – All Bitches Die (record). I just heard this in late 2017, as she was about to hit it really big and it totally changed me. It is just one of the most perfect albums I have heard in recent memory, and I really think it gave me the courage to go in the direction of my “Asleep” album.

The tape I’ve played more than any other is…

Either the Bridget Feral “Desiring Machine” tape or the Depeche Mode “Songs of Faith and Devotion”
I think the record I probably played the most was my dad’s “Heavy Weather” by Weather Report back in the 90s.

It’s actually kind of a sad sounding tape, but it’s really transparent and just kind of makes me feel more optimistic about the future. 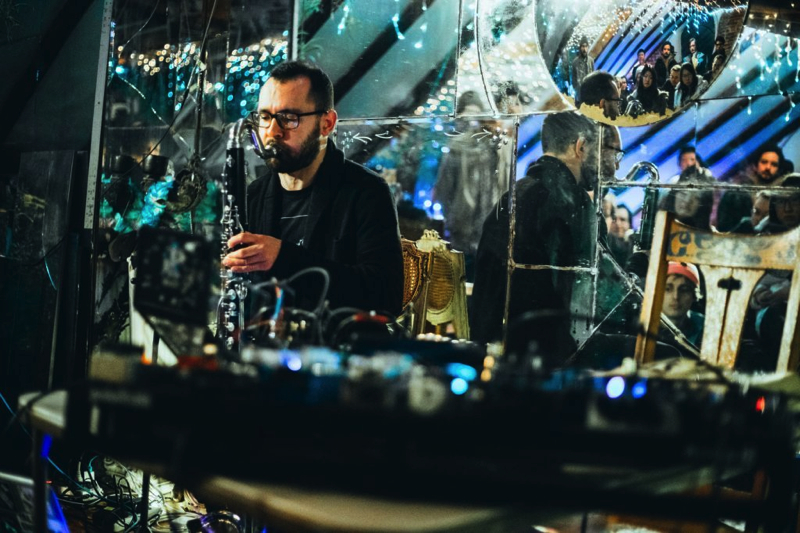 Everyone probably has a bit of a tough time to answer this one, and record sleeves are such an amazing canvas, but probably Car Bomb’s “Meta”, Uriah Heep’s “The Magician’s Birthday”, or The Austerity Program’s “Bible Songs 1” (not out yet, but I’ve seen the record in person and holy crap it looks AMAZING)!!! All three covers are totally different aesthetically, but they represent the type of focus and vibrant personality that I look for in a record. They do not look at all like they try hard to impress with some kind of intellectual refinement.

The strangest cassette I own is…

“Answer Tapes” – it’s a 120 minute compilation of really dark answering machine recordings… The weirdest thing I ever bought for sure. Got it on a whim when I was having a bit of a tough time a couple years ago, knowing exactly what it was, haha.

The Doors – “Weird Scenes From a Goldmine” double record original pressing, given to me for my birthday by my girlfriend in 8th grade. She had a really incredible taste in music and just a fascinating mind. She shaped my musical taste a lot. This answer had to be about the LPs just because most tapes I buy nowadays are pretty rare, being printed either in editions of 50 or 100. I would LOVE to invest on La Monte Young’s “Well-tuned Piano” cassette box set, but for now I’m just quietly waiting until I see it being sold at a more reasonable price (like… under $200). I think

The last cassette I bought was…

I actually got 4 from Armageddon shop in Providence, RI. Rotten Sound – “Abuse to Suffer”, Mgla – “Groza”, Om – Pilgrimage, and a demo by a local punk band The Breaks.

The last record I bought is The Faceless “Akeldama” reissue, just for some nostalgic teenage feelings, haha.

About Gleb
Gleb was born in Minsk, Belarus in 1989, and in the post-Soviet era we took a while to catch up to the rest of the world with technology. Also vinyl was already pretty expensive, so the only records in my life until my late 20s were the ones I inherited from my dad and grandparents. I moved to the states in early 2002 and already in 2007 I was getting pretty into noise (and by extension cassette loops), so tapes as a listening medium have never left my life. I also really believe that different types of music are better suited for different media, and each type of physical of digital medium often defines how we conceive of form of a track or an album. Because all of my earliest memories were associated with cassettes, but also so many fascinating records have ended up in my possession over the years, I would love to answer some of the questions addressing both, records and cassettes. In regard to seeking out relics, I am not so much of a collector of historical objects, but I’m more preoccupied with building my own library of “little histories” in my life. A tape that I have a profound personal experience with is infinitely more valuable to me than seeking out something that I’ve already heard before but in a rare edition. This basically makes my collection pretty eclectic, but consisting pretty much (about 80%) of music made by musicians who are active today. A lot of the things I got as a kid were articles of older music, but it definitely changed since then.

Gleb’s latest album, Asleep, was released on January 15, 2019. You can pick up a copy on limited edition cassette or download it here. Read Inhale the Heavy’s review here.

Be the first to comment on "Gleb Kanasevich (Clarinetist)"