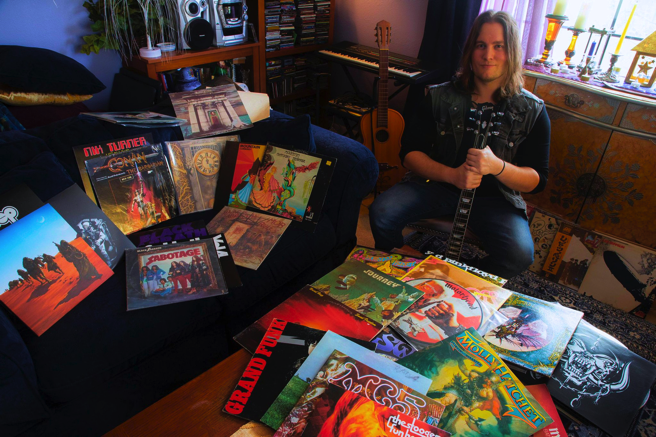 In this offering, we are extremely pleased to get up close and personal with David Wachsman. In addition to writing and composing, David handles a plethora of instruments in the San Francisco based band SÖNUS.

The first CD I ever bought with my own money was The Very Best of Motörhead compilation put out by Sanctuary Records. I must have been about 13 or 14 as this was one of the first steps I took branching out from my Dad’s amazing music collection. I had Led Zeppelin, Black Sabbath, Pink Floyd, AC/DC, The Rolling Stones, etc. but hearing Motörhead was something else entirely; it was truly a revelation. For someone brought up on loud, rebellious rock n roll, this was taking it to another level of total anarchy and adrenaline. I’d feel the same way a little while later when I bought Iggy Pop’s remastered Raw Power. Motörhead was my gateway to both punk rock and space rock, as, being the massive nerd that I am, I immediately had to find out the whole history of Motörhead, which led me to Hawkwind (yet another massive musical revelation and ongoing source of inspiration), which led me to the books of Michael Moorcock and all that followed until eventually culminating in me making my own music, which is an unabashed mash up of all these things that I love and discovered as a kid.

I must’ve been about 19 when my mom got me a record player for Christmas (she got me my first electric guitar and amp the year before) and that started a whole new obsession. She’s the best mom in the world (I know I may be biased) and has always been my biggest supporter (and #1 fan). We went to some antique shops later that week and we had a great time picking out some records that would form the start of my Vinyl collection. I think the first LP I ever bought was Grand Funk [Railroad]’s “Closer to Home.” I’d heard of Grand Funk, heard them on the radio here and there, but hearing “Sin’s A Good Man’s Brother” and “I’m Your Captain/ Closer To Home” on an old record really solidified me as a fan of the band.

I was brought up on the best music in existence and only found there was even more out there! All of those bands and albums that I’ve loved have made an indelible mark in my psyche. All those riffs, lyrics, melodies, beats, and bass lines are burned into my brain for the rest of my life. I was sad as a kid as I thought that all of that music was in the past and no one was making it anymore… Until I stumbled upon The Sword’s “How Heavy This Axe” music video in my YouTube suggestions one night while playing some DnD fantasy hack n slash rpg on my PS2 as a teenager after a slew of Dio and Dio-era Rainbow. This set the light off in my head; “oh wow, people are still making this kind of music today?” And that led me into the modern stoner rock scene with their incredible album (Gods of the Earth). From there I discovered a bunch of great bands and a thriving scene; with major standouts like Orange Goblin, and one of my all-time favorite bands to ever tread the earth in leather pants: Monster Magnet! Growing up I always wanted to make a band that was as heavy as Black Sabbath, but with the psychedelic synths and spaced-out trippy passages, themes, and textures of Hawkwind, and the crazed-but-cool punk-nihilism of The Stooges. It turned out the band I was imagining already kind of existed and was just waiting for me to find it. Monster Magnet pretty much blazed the trail that Sönus walks, and I salute the genius and musical tastes of Dave Wyndorf.

In my whole life… it would have to be something by Led Zeppelin, Black Sabbath, or possibly Hawkwind, but which album specifically, I can only guess… of course I’ve also left various albums in my car’s CD player for months on repeat; currently Uriah Heep’s “Demons and Wizards” is leading the pack with an extended residence over basically all of Covid and much of my pre-pandemic commute to SFSU for my final year.

Currently, once again, Uriah Heep’s ultimate masterpiece “Demons and Wizards.” Opening track “The Wizard” just takes me to my happy place every time. It’s almost like a mystical amulet that wards off bad moods and vibes. The fact that it’s about a wizard just makes it even better for me. I also love Funkadelic and Parliament, and their albums are always a lot of fun to groove to.

It depends on what the reason is, but if I really want to get a good sulk in, Black Sabbath’s Vol. 4 or Sabotage never fail to make it all better. Of course, Judas Priest’s Sad Wings of Destiny is also a heavy contender.

Oh man, you’re killing me here; this one is so impossible to choose! I’m a huge fan of comic books, old paperback sci-if/fantasy book covers, and any sort of art that fires up the imagination (mine, I should say, is sometimes a little too active). There’s so much incredible art in the music I love- the best kinds truly fit the vibe of the album and attract the eye. Big shout out to Derek Riggs for his Iron Maiden album covers that definitely played a major role in getting me into that band… and of course I’ll buy any album with a Frank Frazetta cover (even if the music doesn’t always live up to that artwork). Hmm, but my favorite album cover would probably have to go to Ken Kelly’s absolutely astounding cover to Rainbow’s “Rising” (which is an album that definitely lives up to the promise of its album cover). A masterpiece of a record, a masterpiece of album art. I wish I had it on vinyl to truly take in all of the details of it. It’s got everything, such an incredibly mind-blowing piece of art, and the perfect marriage of sound and imagery. 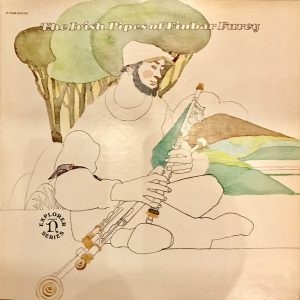 Hmm, probably the most unexpected LP I own, given my music taste (or at least what one might assume of my music taste from taking one look at me) is “The Irish Pipes of Finbar Furey.” Now, I’m not Irish or British at all, but I’ve worked as an Archaeologist for many field seasons in Ireland excavating an Anglo-Norman castle in a beautiful little town called Ballintubber, in Roscommon county. The town is bookended by two incredible pubs (Kenny’s and Garvey’s) and they frequently hosted live music, mainly traditional Irish music, and the melodies of the pipes stirred something in my soul. I’d recommend anyone to check out Finbar Furey’s spellbinding “The Lonesome Boatman.” That song shakes me to my core. I also own a mandolin and am a fan of laced collar shirts… Maybe one day I may find myself playing medieval music and strutting around in tights like Ritchie Blackmore, who knows, life is long and full of many strange turns…

I almost don’t want anyone to know so I can guard them like a secret treasure of unfathomable power; and really, aren’t they just that?

Alright, alright, just between you, me, and the readers of this article, the rarest LPs I own are *pristine* Japanese imports of Led Zeppelin’s “II,” “IV,” “Physical Graffiti,” and “Houses of the Holy.” These were recently gifted to me from my father, with as much importance and reverence as a father might pass the sword and armor of their family down to his son in days long past. And so shall I guard them, cherish them, and keep them safe! You see, Led Zeppelin is the closest thing to a religion for my Dad and I. If “Stairway” comes on in the car when we arrive somewhere, we’re staying until it’s over- some things are just sacred, and Led Zeppelin is one of them.

Honorable mention goes to an original picture disc of Motörhead’s “Beer Drinkers and Hell Raisers” from my cousin Martin, who is also my brother in Heavy Metal, Rock n’ Roll!

The last LP I got was a gift from my Drummer, fellow Archaeologist, and best friend a guy could possibly hope for; Colin Jaramillo. It’s a record store day exclusive live album “Iggy Pop: Berlin ‘91.” It’s an incredible performance from the year I was born, and having seen Iggy live at the Greek in LA in [2016, I believe], it just goes to show what a legend he is that all these years later, he’s not lost one ounce of energy. One of the last of the living legends, long may he live!

The last LP I bought with my own money though, was probably Monster Magnet’s phenomenal covers album “A Better Dystopia.” Nobody owns a cover like Monster Magnet, and the art in this thing is exactly what the LP format should be for- holy crap is it detailed and huge! A perfect fit for the record, and one of my favorite album artworks of all time. Maybe one day we’ll do a covers record too, but for now, our album “Usurper of the Universe” is streaming everywhere and available at sonusrocks.bandcamp.com and Forbidden Place Records. Cheers, and thanks for reading!

SÖNUS’ latest album, Usurper of the Universe, was released on February 4, 2022. It is available on CD, cassette and digitally from SÖNUS’ Bandcamp.

Be the first to comment on "David Wachsman (SÖNUS)"