In this offering, we are very pleased to get up close and personal with musician Daniel Howard.

That would be Metallica, the original Garage Days Ep. A friend of mine had an older brother who was a Metallica nut. He wanted to give me the record for free (he had no vinyl player and knew there was one at my house) but it felt wrong so I gave him about 50p in change. I was about 11 or 12 years of age at the time and really had no interest in heavy music. It took me some years to come around and actually play that record. Sadly, it’s currently on holiday somewhere, and I’m unlikely to ever recover it.

Prince “Diamonds and Pearls”. My older sister had the record and I’d sneak into her room and play it every chance I got. The vox are just spectacular. “Thunder” hit me on a deeper level than it probably should have. It felt dangerous listening to this record as a kid in the early 90’s. A complete thrill. I never wanted to be Prince, but I wanted to be in his band. The New Power Generation were something magical.

In terms of time spent spinning in the player, without doubt, David Bowie “The Next Day”. It’s just fucking great on vinyl. If I’m anyways indecisive in picking something to play, I’ll always throw that record on while I file through my collection. The way that album dropped out of the sky… It was a real moment in musical history. It bypassed all trends that are currently the norm. Gerry Leonard is also a hero of mine, sublime guitarist.

Sufjan Stevens “Bring The Illinois”. That’s a great record, it has a real instant warmth. That said, the Gacy Jr track is utter misery but I love how it swallows you in and tricks you somewhat. “In my best behavior, I am really just like him”, not particularly feel good, but possibly my favorite lyric of all time. I could talk about how great that record is all day.

The Neurosis/Jarboe collaboration. In for a penny, in for a pound.

“Blackstar” David Bowie. It’s the record sleeve that spends the most time in my hands. It’s the one that I get excited about showing to people. I’d recommend it to anyone who is thinking of starting a collection. It was the record that reignited my interest in vinyl. It’s more than just music, it’s a real piece of art on every level. Just pick it up and start discovering. 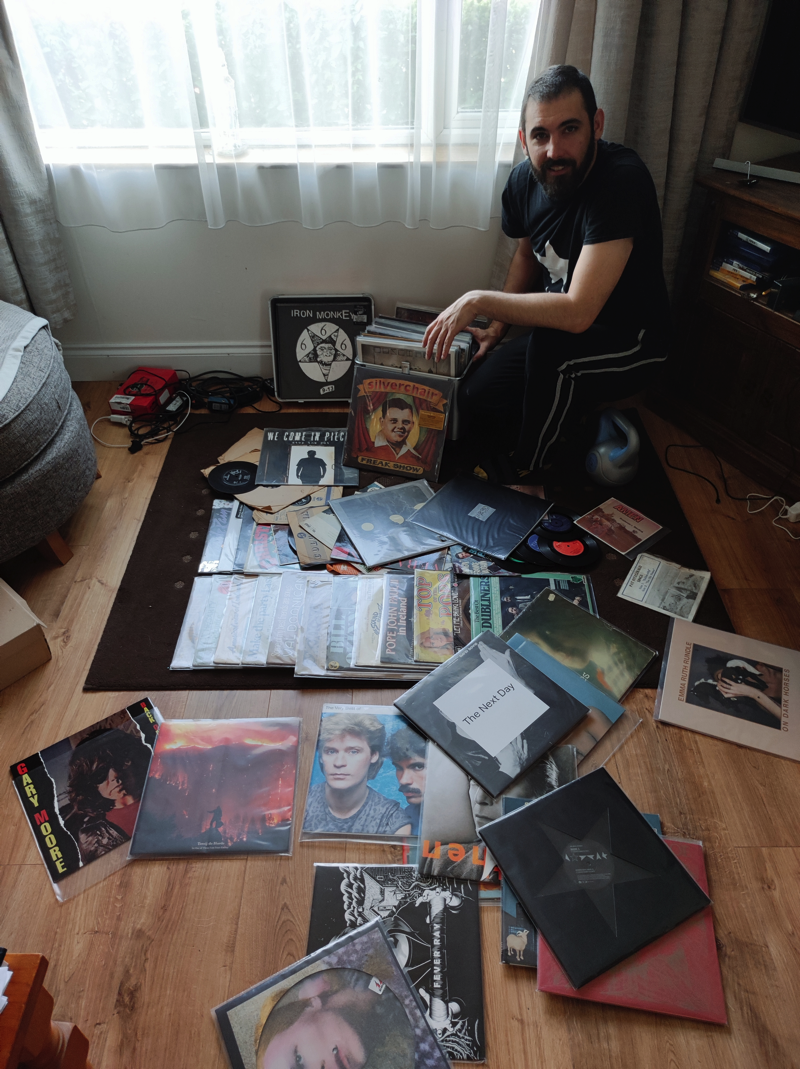 I’ve a lot of very odd and strange records that my grandfather left after him when he died. There’s a lot of religious hymn stuff, but in amongst it is a Top of the Pops 12″ from the 70’s. It has a page 3 model on the cover, it’s almost cartoonish in it’s manner. Seeing that sleeve in amongst Pope John Paul and all these religious hymn records was quite the trip. It was like coming across some sort of side quest scenario from 1975 that’s probably best left unexplained.

There’s some real rare stuff in my grandfather’s collection, but most of it is damaged beyond repair. Old Irish pub songs and folk compilations. There’s some classics in there like The Troggs – House of the rising sun 7″ and some Thin Lizzy singles but the real rare stuff is so parochial, it’d go over most people’s heads. I’m pretty sure no one else on the planet has the Pat Fitzgerald Sings 7″ from the 60’s you know? Rare, but perhaps not desirable to most.

Emma Ruth Rundle, “Dark Horses”. I’m just back from what was a great show in Limerick, Ireland and I picked it up from the merch stand. This lady is as real as it gets. I’ve just ordered Jo Quail’s “The Cartographer” too on the back of that show. It’s the vinyl paradox though. The last LP is always the next one.

I play guitar and sing with Post Metal group Partholón. Our 12″ “Follow Me through Body” is available from Bandcamp. We’re wrapping up a new record this weekend (laying down vox this Sunday) stay tuned for news in late 2022.

I also play guitar and sing in Alt-Rock group “The Magnapinna”. Our most recent release “Party Rumours” is available now. 12″ release is due in January 2023.

Most recently, I took part in the Morrow record which I believe is due a vinyl release soon. I can be heard singing on the track “Of Sermons And Omens To Mend.”

I can also be found as an occasional guest/co-host on the Metal Cell Podcast with Richie Le Faux.

Be the first to comment on "Daniel Howard (Musician)"